“Log #7: Host is ready to fuse with his choice of animal, an octopus.” “Log #15: The host is now resting in the recovery room for the 4th day.” “Log #20: Seems as though the host is having a hard time adapting to her new form, she is unsure where she is.” “Log #25: The host now wishes to be called ‘Octavia’ not very subtle” 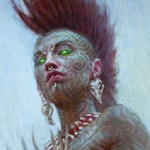 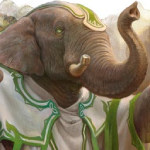 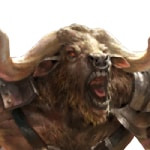 Simic Hybrids are humanoids that have used magic to fuse with another creature. This gives humanoids various abilities depending on the trait of the animal they fuse with. Common enhancements are water breathing, extra limbs, or tougher skin.

Since Simic Hybrids are made and not born they don’t necessarily have a community in a shared race. In the Ravnica campaign setting the Simic Hybrids are almost always a part of the Simic Combine guild, hence the name. However, this race could still exist in other settings but may feel even more isolated due to the magical circumstances they are made in.

Many Simic Hybrids will keep their names that they were born with. Many begin as Humans, Elves, or Vedalken, but other non-animal humanoid races could be used as a Simic Hybrid base. Some people may choose a new name once they have become a Simic Hybrid, this article focuses on those names.

Creating a Simic Hybrid takes incredibly strong magic to create. This arcane energy is forced into the humanoid to fuse and increase the power of the host and the animal. Though some subjects find that it only takes a few days to recover, others can experience unintended side effects such as altered mood, amnesia, or fatigue. Those affected by such side effects will change their name to reflect their current mood, new body, or to highlight their alteration.

Her wild magic was a gift from the heavens, at least that what she always believed. One unexpected wild surged polymorph made her question this so-called blessing.

Awakened, startled, she gazed into the mirror. The horror she saw she couldn’t believe. Is this who she was? Is this really what she wanted?

With his tough, scaled skin, his wide wingspan, he finally became what he always wished to be. He hardly questions that lizard and bat that the wizard used to turn him into a dragon.

The Traveler has always understood the importance of progress. Change and chaos are a good thing, and this is only the next step of organic change, right?

In high magic campaign settings, you may consider becoming a Simic Hybrid as a fashion decision rather than one to improve your ability. However, just as any procedure goes, there can be unexpected results.

Her transformation has made her notice the small things. The wind whispers secrets to her. Perhaps she will listen, despite her unnatural being.

Vanity is vanity. Her beauty and brains surpassed all others, but when experimenting with magical hybrids, she made a critical error. She now ensures that a mirror is never too close.

Her choice of animal to fuse with seemed odd to most, but now she can easily climb and crawl wherever she needs. She altered her name to match her altered form.

As many people who choose to become Simic Hybrids, there are just as many who are forced into becoming them. What do you expect, progress can’t happen without a few volunteers.

His Oath of the Ancients feels so far away nowadays. In this new form, he finds it hard to spread the light, and he feels that the light inside him has died.

His process with a sword reached its peak, so he began to find other ways to improve his fighting style.

Augmentation and evolution were common parts of his craft. He only found it natural to move development to his own body as well.

Simic Hybrids may not fit into every campaign, but can still be an interesting race to consider if you want to play someone who is unhappy with their past or current self. This guide focuses on potential new names a Simic Hybrid, so you may want to consider what your character was before they transformed and check out our name guide on that race.

I hope I was able to give you ideas on how you can name your Simic Hybrid characters. Feel free to leave your thoughts and name suggestions in the comments. Thanks for reading!