The half-orc stood motionless as if accepting his fate, watching one of the surrounding archers fire an arrow at him. A moment later, with unbelievable speed and agility, he spun around and avoided the projectile, letting it hit one of the enemies behind him. “It’s him, it’s Munn Ro! Kill him!” 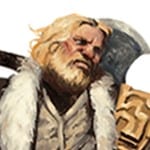 Martial arts students, roof-hoping burglars, silent assassins, and traveling wanderers, all of them can be Monks. They all share the love for self-improvement and enlightenment, and whatever their goal is they do it with devotion and commitment.

They possess intimate knowledge of anatomy and, more importantly, the flowing energy called Ki. This allows them to pinpoint important points of the body, being able to do significantly more damage to their opponents and even paralyze them.

Monks who leave their place of birth and training most often have a compelling reason to do so. They are proud of the quest before them and never ashamed of their names, such as Finn the Black Raven, Reen Lo, and Maya Featherstone.

A good Monk name provides a sense of mystery, potential, and the unknown. It can often sound rather exotic as many come from some of the most unusual places.

Having been trained by one of the three living masters of Kinkee Temple, he is now secretly on his way to the plains of Mairahu where his mission is to assassinate the queen. The roads ahead are dangerous, but the rewards for success are invaluable.

Having come back from a personal quest given by his master, a disaster waited for him. Everyone he knew, everyone he grew up and trained with was dead. With little evidence of who was responsible, he travels west as he follows the only lead he has.

Having proven herself an expert martial artist she convinced her masters it would be good for her to travel for five years, learn as much as she could, and then return with the knowledge. It’s been almost eight years now, and she still hasn’t come home.

A female Monk is a common sight. As they are usually more slender and agile, they are well suited for all the acrobatics and rigorous training Monks go through, and they regularly become experts in their field of choice.

As one of the current four martial arts prodigies in the Open Palm School, she’s completely entranced by all the training. Soon she will find out if her current skill and potential will be enough to stop the upcoming danger that is looming around.

Born with a highly inquisitive mind, one day the curiosity got the better of her and she left her home excited to see what the world has to offer. While the journey has been harsh, hopeful information reached her ears today and she finally feels alive again.

Most men choose a sword, a spear, or an axe for a weapon, but those who became Monks decided to turn their whole body into a weapon instead.

As a full member of the Shadowstep organization, he’s well on his way to assassinate as many members of the Hinra family as he can. Having spied on them all for several months now, the plan has been finalized and he’s ready to strike.

Traveling with a merchant and his family, half a dozen bandits ambushed them along the way. He defeated them all in such a fashion that the merchant keeps recounting the story on a daily basis, even today, seventeen years later.

Creating a badass Monk name usually involves using a somewhat exotic first name, along with a surname that will make a lasting impression on those who hear it.

It is said no bolt, arrow, or flying dagger ever managed to hit him, and that a melee approach is the only available option to defeat him. Rumors say he found a secret source of power, while the truth is that his elven heritage gave him plenty of years to perfect his skill.

He moves and reacts as if he had a sixth sense. No matter the direction the attack comes from, he’s somehow able to avoid the harm. Some say he’s actually blind and that’s the reason, the source even, of his all but magical abilities.

Meditation and tenacious training leave little room for anything else, but sprinkling some humor on top of that can yield interesting results, to say the least.

Having been searching for something that would let him find his true calling, he found himself upon a secluded village. There he met a Monk master who’s been teaching him everything he knows till this very day.

Best known for his agility and hand-eye coordination, he’s been traveling with a dozen of performers, where his part of the show was to catch an incoming arrow and instantly send it flying back, hitting the target behind the shooter.

Monks strive to perfect themselves, their minds and bodies, as well as their skills. Being experts in manipulating ki energy, they are able to perform amazing feats of strength, agility, and speed, unimaginable accomplishments to a mere commoner. Think of how and why your character started to train, who was their teacher, and why and where they plan on going. Think of a name, one that lends itself to the character’s mystery, strength, or weakness, and venture forth into the danger that awaits in every corner of the world.

Did you enjoy this guide? Please, tell us some of your favorite names in the comments and share your own methods to come up with a Monk name.