Carefully trudging through thick jungle, the party froze in tracks as a jaguar appeared out of nowhere, its golden eyes upon them. “I am Niala…” – the beast suddenly spoke to the now astonished adventurers. A moment later, an elven woman stood there and continued – “And you best explain your actions here, on this sacred ground, unless you too wish to suffer nature’s wrath.” 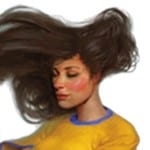 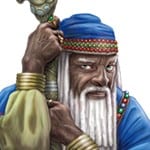 Druids live as one with nature and strive for a world where everyone does the same. By cooperating with nature’s elements they nurture and preserve its balance while condemning the unnatural and opposing those who want to destroy it.

Any living creature is welcome in their hearts, as long as they don’t oppose the natural order, and they also tend to protect sacred grounds, no matter the cost. When the danger becomes considerable, they tend to act sooner than later.

Druids seldom roam the world but when they do they tend to have a very good reason to do so. Some are known to join adventurers, and some of the names they can have are Jamake Highwater, Eireen Softpaw, and Miraalee Sunflower.

They strive for eternal balance, determined despite its elusiveness. They are fierce in defending nature but can be as equally generous in showing kindness to others, and their names often go down in history.

Having lost her parents decades ago, when she was but a child, she’s now the sole guardian of the Wenkan Jungle. While she’s always ready to protect, she loves shapeshifting into different animals and interacting with all the residents of the forest.

He is currently making his way down the river, leading a group of dwarves towards their destination, dozens of miles away. He knows the territory as well as the back of his hand, and they also all share the same mission with a just cause.

Despite living in solitude for several centuries, this olf elf would tell you he’s been having the time of his life and that he’s never alone. The animals keep him company, and he spends most of his time living as a shaggy brown bear, protecting them.

With mother instincts, they are as protective of natural balance as the lioness of her cubs, standing fiercely in front of any threat. While most prefer to show compassion and hospitality, they are no strangers to hostility and lethal combat if necessary.

Bad news travels faster, they say, and this time it was no different. Reports of a monster, a hydra, in the neighboring kingdom reached her ears and she’s been traveling there for the last two weeks, still on the lookout for anyone who could help.

An entrance to the temple stands before him, and all the weeks of struggling to get there seem so long ago by now. This time he made sure he’s well-rested and ready, though, for he knows the undead evil that awaits him inside won’t show any mercy.

Their goals involve a certain balance in nature, and when a major threat arises to disrupt everything they know, they tend to act against it. At such times, they often join other adventurers in order to secure the victory and restore harmony.

It’s been three weeks now and the rain hasn’t stopped. However, it’s not just the rain, but thunder and lightning the land hasn’t seen in centuries. Something’s amiss, for sure, and he’s now traveling to the top of the mountain to further investigate.

For seven years he has been slumbering in his grove, magically hidden from the outside world. Today, a strange force reached his home, shattering the wards and waking him up in the process. For some reason, he’s feeling too weak to go inspect.

Clever last names often incorporate nature, life, and balance in a logical, natural, way for such a character.

Nature is full of beauty, danger, and mystery. It has everything it needs to maintain harmony, and one part of that balance is humor. A way to provide that is to have a whimsical and playful name.

He’s fascinated with plants, animals, and nature in general. A certain rabbit follows him everywhere he goes and you can often find him commenting on the scenery and flora and fauna out loud, describing it all to his animal friend.

He spends a lot of time in the form of various animals, although he prefers the ones that can climb. The forest is full of trees and there’s no better joy for him than to climb them, jump from one to another, and feel the wind as he flies through the air.

Druids view themselves as guardians of nature, whose balance is always in danger. They actively destroy the unnatural, such as the undead, whenever they can, and even oppose civilization if it doesn’t work alongside nature who was there long before anyone else. While they try to act without making themselves known, if the danger proves to be too big, they quickly move in more direct ways. Create a druid, and come up with a name for a character who will keep the balance in the world that awaits you.

Did you enjoy this guide? Please, tell us some of your favorite names in the comments and share your own methods to come up with a Druid name.