“Don’t worry, my lady, no one would dare to attack us.” The smirk on the knight’s face suddenly turned into fearful confusion as a war cry filled the air like a bear’s roar, startling the nearby crows. As he drew his sword, he heard one of the men mutter in terror – “By the Gods… it’s Torgar Steelbane.” 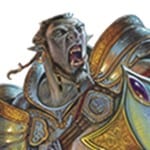 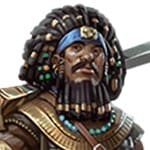 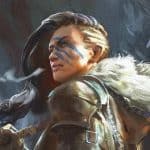 From the frozen mountains in the north to the hellish jungles of the south, a barbarian’s presence is equally terrifying. Charging fearlessly head-on, even against all odds, they strike fear into the hearts of even the bravest of people.

Barbarians are ill-suited for civilized life, preferring to wander the lands as their rather chaotic nature longs for unpredictability. The thrill of the hunt, the perils of combat, and the adrenaline rushing through their veins are the things they always crave for.

Memorable barbarian names almost always provide a sense of roughness and a small dose of primitivism but never fail to paint a picture in one’s mind. Some of them are Rognur Stonefist, Halar Bloodaxe, Garur Steelskin, and Magnas Stormbringer.

Thar has been leading The Skullsplitters, a clan which he named himself, for almost two dozen years. Nowadays, he’s well in his 50’s and is longing to meet death in battle before he becomes too old to fight.

Rhag killed his first bear singlehandedly at the age of fourteen and everyone stopped counting how many after that. He uses the animal’s claws in combat, refusing to use any other weapons, which act as a surprisingly effective means to end one’s life.

If there’s one thing he’s bad at, it’s personal hygiene. However, ever since he unwillingly slashed a man’s throat with a sharp bone stuck in his long hair, he has let it grow without much care since then.

Female Barbarians are a common sight enough, bringing the same level of energy and fury to the table. An angry female can be a frightening sight, and if that person is also as strong as a bear, and can enter a frenzied state at will, you’re correct to flee.

She’s always been very competitive and never really wanted the role of a gatherer or a children caretaker. In fact, she’s proved to be a cunning and efficient hunter, nowadays revered by the whole clan, and the main target for numerous suitors.

Also known as the Angry, ever since she exacted revenge on her parent’s killers, many years ago. Since that day she knew there’s a certain ferocity in her waiting to be unleashed.

While they usually aren’t as skilled as knights or disciplined as trained soldiers, male barbarians make it up with their sheer strength, endurance, and ferocity. There is a saying: a raging barbarian is more dangerous than two orcs.

Teig One-hand has been slaying his enemies for two decades, proving you only need to be able to hold one weapon to be effective. He keeps boasting no one in the world would be able to beat him if he had both of his hands, while his efficiency with the one he has seems to be backing his words up.

Having defeated the former leader of the tribe in single combat, he immediately led the warriors into a raid. Most thought this was simply an aggressive style of leadership, yet the truth is he received a fatal wound during the duel. So far no one has noticed, and it’s a secret thanks to the powerful potions mixed by the tribe’s druid.

Survivors, hunters, and fearless warriors. Barbarians are that, and much more, and they often set out into the world for different reasons. The lack of sympathy for more civilized places offers interesting roleplaying opportunities and when all else fails, they can showcase their violence to full extent. All you need is a name that will send shivers down your enemy’s spine and you’re good to go.

Did you enjoy this guide? Please, tell us some of your favorite names in the comments and share your own methods to come up with a Barbarian name.