“Seems like you people are looking for trouble.” Snarled the Githyanki captain at the invading group. “Please, we came for help, we need to destroy a Mind Flayer colony an–” “Help with those brain eaters? Perhaps we could…” She pondered as she brandished her blade. “But first prove yourselves as worthy allies to me, Captain Xizi’ich!” 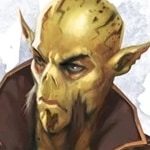 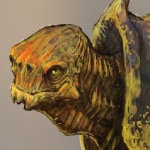 All Gith were once enslaved by the Mind Flayers. Once they finally overthrew their tyrannical overlords, the Gith were immediately broken into two. The Githyanki have become ruthless raiders taking what they want for those they find in their home, the Astral Plane.

Githyanki looks almost alien with their flat noses and yellow skin. The Githyanki’s home base is the city of Tu’narath, but they are often found on their Astral Ships pirating those they find wandering the Astral Plane. This shows their dominance over the Plane, as well as brings life to their lich-queen, Vlaakith.

The Githyanki decree themselves as the rightful inhabitants of the Astral Plane. This causes their names to sound quite alien to those in the Material Plane. The names also reflect the gruff nature of the Githyanki with most names being chosen to exhibit strength.

The Gith language is divided into two, but both dialects use the Tir’su script. The Githyanki society revolves around their raiding clans, this has made their version of Gith full of slang and much harsher than the Githzerai variant. Githyanki are also hatched from eggs on the Material Plane, meaning they may be given one name when hatched, but change it later in life.

In between the harsh bouts of combat training, she finds solace in the mushrooms of the cave floor. Is the Material Plane really as bad as her trainers say?

Between her clan’s great raiding endeavors she weaves the tales of their bloody victories, though some may be slightly embellished.

His goal was only to gain great strength, so when offered the ability to gain immediate magically power, of course, he had to accept, even if his soul was the cost.

Female Githyanki are often seen a greater than their male counterparts. However, they must be careful not to garner too much praise, lest they catch the terrible attrition of Queen Vlaakith. She has been know to ‘take care’ of those who have even the slightest chance of overthrowing her.

Her magic of storms helped swiftly rise through the ranks, she now is the captain of the raining tempest.

Known as the ‘eyes of Saamasal’ she has been seen striking down enemies from over one thousand feet away.

Most male Githyanki are seen first as basic infantry until they can prove themselves beyond that. Many Githyanki who find new lives outside Githyanki society tend to be male warriors who were unable to rise through the ranks. Those that become deserters are seldom welcomed back.

While mocked as one who studied like a Githzerai, he perfected his mind and body allowing them to act as one.

His skills in battle had always been limited, but once he began working in the shipyard, people found out what Astral Ships were truly capable of!

While almost all Githyanki serve Queen Vlaakith, many raiding clans have some autonomy. Some clans are formed out of simple coincidence while others share a particular skill, from assassination to magitech. Some may be incredibly proud of their clans, while others may choose not to say what clan they hail from.

The Gith are a tragically divided race, and playing a Githyanki shows that you want to be chaotic and strong-willed. The name you pick should be one that strikes fear into the heart of your enemies, or that shows that you are ready to turn over a new leaf.

I hope this article helped you pick a name for your Githyanki character. If you have any interesting names or opinions of your own, feel free to leave them in the comments. Thanks for reading!