“Just take the child!” – said the woman on the brink of crying. “Alright. Should I mention you at all? And does she have a name?” – the old man asked, his calm voice showing support. “No, tell her nothing. As for the name, it is Hope.” 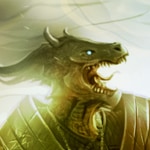 Tieflings are a mix of human and outer-planar creatures, most often of a fiendish origin. They resemble humans, though their skin can pass the usual colors, and they often have a distinct physical trait, such as horns, scaly skin, or an unusual smell.

They don’t have a culture of their own, instead, they are outcasts, shunned upon, even to the point where some of them were killed as babies as the parent couldn’t accept such a child. Only a few experience love in their youth and it can show.

They don’t really belong anywhere in particular and have no homeland. Instead, they are more likely to roam the country, even going for longer journies as they have nothing to cling to. Instead, they like to travel, looking for a place to call their own.

Many Tieflings have no surname, as some don’t even know who their parents are. Besides, they prefer to be defined by their actions, leaving their heritage irrelevant.

Cunning and cautious, they try to make the most of life. Those who are alone are wary of strangers, but if they actually befriend someone, the bond is hard to break.

An expert smuggler, especially when it comes to exotic herbs. The black strand is actually a rare plant that only she knows where to get.

Works in a high-class tavern as a performer. Unbeknownst to all, her gang outside of the town robs the former patrons as they leave.

Raised by a dwarves who were unable to have children of their own. One of the rare Tieflings to experience love in their youth.

From deceiving “silver tongues” to potent magic users, they are quite versatile with their abilities. Many decide to sell their talents to the highest bidder.

Currently has only one goal. To find the killer of his dog, the only friend he ever had and execute terrible revenge upon him or her.

Having found a spellbook years ago, he now serves as one of the King’s Mages in a rather turbulent kingdom.

Having traveled a lot, he settled down in a fairly large city, running an alchemy shop. Uses spare time to read obscure tomes.

Seeing how many are outcasts, with no families at all, sometimes their name is all they have for a first impression. Having a virtue name shows what they’re about.

Those who manage to reach their adult years have probably been looked down upon their whole life. As such, it is no surprise many choose to leave their birthplace in search of something they could call their own. Play a Tielfling and rise from rags to riches.

Did you enjoy this guide? Please, tell us some of your favorite names in the comments and share your own methods of coming up with a Tiefling name.