“Hey, you are not an orc!” – the captain exclaimed, clutching his bloody chest in pain. “My name is Britur….” – the half-orc paused as the ship kept swaying left and right – “…and what I am is your sentence, your judge, and your executioner.” 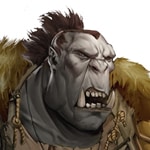 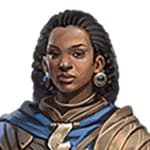 Half-orcs are, on average, a bit taller and heavier than humans. Most still have prominent jaws and tusks for canine teeth, albeit smaller than the pure orcs. They are looked upon as bestial humans, while orcs call them “just another pink-skin”.

They are known to possess both orcish strength and human intelligence. However, they are also often shunned by society, human and orcish. Those who stand out, found a way to be accepted, most likely using one of the mentioned characteristics.

Many live as outcasts, learning to adapt to the world as it is. They can be a perfect match for wild unexpected life, full of adventures. Some also choose the calling of a mercenary, satisfying both wanderlust and bloodlust.

Half-orcs can have human or orc surnames, but some prefer to make a name of themselves, both literally and figuratively.

Female half-orcs go through the same hardships as males. They are on average shorter and thinner but can be just as dangerous, if not more.

Best cook in the tribe and can hear up to a hundred feet. Or at least that’s what others swear by.

Ever since she killed a boar, she wears its skin for clothes. Unbeknownst to others, the boar was already gravely injured.

Seems to enjoy the sunshine more than your average person. So much so that she decided to become a sailor at a young age.

Bloodlust flows through them, often fueled by the endured injustice. They can be unpredictable as humans, and as merciless and savage as the orcs.

A mercenary, general, veteran warrior, and a winner of thousand battles. It is said even his flaws are made of iron.

Having trained in a monstery from a very young age, Zotar feels quite safe roaming the world, now that his grandfather passed away.

Saved by the local druids from the wolf’s jaw as a child, he is a longtime member of Priir, a secret Druid Order.

Some half-orcs truly make it in the world, achieving wealth, power, glory, and fame. Breaking the law and acting against the ruler, and doing so successfully, is often too much to resist

Rare survivors of his attacks swear on their life they heard an eirie song before the slaughter began.

As one of the local rangers, he enjoys living in nature, protecting the travelers and animals in need.

How he came to own a real dragon tooth, no one knows, though there are those who dare say it’s fake.

The runt of the litter, an outcast, underdog, adventurer, leader, notorious, a legend. As a half-orc, you can all of those. With human curiosity and orcish bloodlust, they provide a wide range of roleplaying options, and can certainly leave their mark upon any world they live in.

Did you enjoy this guide? Tell me what are some of your own methods of coming up with a half-orc name.