“Eat, drink, be merry!” The Satyr said as she pushed her new friend towards the banquet table. “Here in the Feywild we only enjoy the most extravagant feasts! I’m Pipa, but you can call me Trixi.” She proclaimed with a mischievous smile. 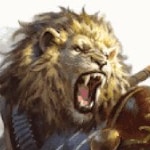 You may find a Satyr waiting for you at the end of a very long wardrobe, no wait, that’s a Faun? Either way, these Fey beings look human upon first glance, but their horns, furry arms, and goat legs quickly show their true nature. Satyr’s tend to always be in high spirits and enjoy the simple pleasures of life.

Hailing from the Fey, Satyrs tend to be closely connected to nature. However, it also gives them the natural disposition of pranks and trickery. They believe that the people of the Material Plane are much too serious. This is why they tend to pull pranks, and while it sometimes goes too far, they never intend any ill will.

Satyrs tend only to have first names. They are not tied to families and live in communities that all share in the maintaining of life. There are no leaders, only party planners! Satyrs also give each other nicknames based on personality, looks, or a particularly funny story.

Satyr’s names are a bit whimsy to them. You can look to other creatures of Fey heritage like Elves or Gnomes to get a broader idea of Fey names. Satyr names are almost always said better with a wide smile, which reflects their jovial nature.

Named after the lovely red of a fresh pomegranate, he eventually discovered that a dagger was much better at producing such a red hue.

Though she enjoys galloping through, when she spotted the dusty traveler speaking on a land of endless sand. She leapt at the chance to see how one place could be so dusty.

Male and female Satyrs are different in most of the ways humans are. Male Satyrs tend to have more hair and be more muscular. However, in the community, male and female are equal in almost every regard.

His trickery has always been known to go a bit too far, even for his fellow Satyrs. Despite this, his sly mouth and quick feet help him weasley his way out of most conflicts.

Drowned in ale, a noble death for a Satyr. However, when he returned two weeks later, the others were aghast at his new, otherworldly abilities.

Female Satyrs are fun, elegant, and charismatic. They, are always the life of the party and attract plenty of positive attention.

The Bard life is truly one of great fun and high spirits! But when your companions are attacked by a red dragon, a healing word can only do so much.

A poem The Satyr Killer: Oh Boni, my dear, my life. Oh Boni, I see you day, I see you night. Oh Boni, why, oh why, do I find myself caught at the end of your knife?

Satyrs love to give each other nicknames. It could be a play on their name, it could be a highlight of a particular feature, or it could be from a really funny story you just had to be there for. Whatever it is, it probably isn’t one you would choose for yourself, is it?

The Satyr is a great race for those with bubbly personalities, or those who want to know what it might be like being an extravert. Have fun when deciding the name of your Satyr, after all, it’s what they would want too!

I hope this article helped you pick a name for your Satyr character. Feel free to put your own name ideas in the comments for others to see, or just what you thought. Thanks for reading!