“You are not worthy of even asking that, wretch” – an ever-melodic voice said. Before the perfect sword-cut came, the creature heard the elf’s words –  “But to answer, my name is Inoquen, and let it be the last thing you know”. 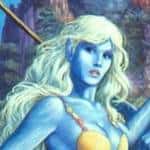 There are many subspecies, but a typical elf stands around 5’8” tall and weighs about 150 pounds. Their slender form hides their true strength, and their joy and anger come as quickly as they go.

Their natural agility and dexterity allows them to move quickly and without much trouble, even in rough terrain. They excel at archery, while magic comes naturally to them. Living over 700 years, they are considered adults when they reach 110 years.

They are rational thinkers, preferring cautiousness and planning to rash actions. Once they do commit to something, they are dedicated and tenacious, putting a great deal of care into it. The optimal result is what is always strived for.

Elves have rather close families, though it depends where they come from. To someone who sees them for the first time, all elven names simply sound exotic.

While there are exceptions the elves generally consider females completely equal in every regard. So much so, inequality isn’t even contemplated.

Once engaged to a prestigious noble, she left her home and ran away. Today, she is a member of an elven tribe, living deep inside a forest, enjoying the natural life without politics and similar occupations.

A well-respected wizard, she is the Head of the Abjuration Ward at the Ikrix Magic Academy.

One of the six rangers who were entrusted to guard the surrounding region. Unbeknownst to many, she and the remaining two alive are still fighting for their lives.

Archery, sword-fighting, magic. You can expect an elf to perform each, with exceptional prowess. They keep to tradition, discipline, and order.

A soldier, a Captain, a traitor, a pirate. Quincan now roams the high seas, raiding and plundering, though still remembers his vow of revenge.

Captured by orcs almost a year ago, recently he managed to escape. It’s been two weeks and he is still on the run, with orcs not far behind.

Owner of the Unicorn’s Smile, “the best tavern in the western part of the city”.

Sometimes certain elves achieve enough fame or notoriety for others to refer to them with a new name, even making their real last names become forgotten knowledge.

If anyone knows horses, it’s Inarie. She has an amazing ability to talk to them, which many contribute to her magical ability.

Carries an amulet with a black opal in it, said to contain terrifying magic which allows him to transform into a giant snake.

An expert burglar and a thief, Makaela is seen only when she wants to. Master of disguise, she leads two lives, daily and nightly.

Elves are easy to start enjoying themselves, as well as getting furious. While many see that as being impulsive and impetuous, they probably see it as superior self-control. This certainly adds to the roleplaying, allowing us to portray our elves any way we want to.

Did you enjoy this guide? Please, tell us some of your favorite names in the comments and share your own methods of coming up with an elf name.