“Two orcs walked into a bar…” – the halfling on the stage started, looking at the audience. A few seconds later, an unknown voice said – “What kind of a joke is that, Rosco!?” – “No, I mean two orcs literally just walked in!” – he said, drawing his dagger. 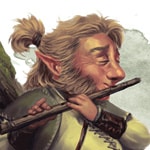 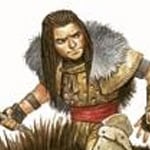 Standing about 3 feet tall, weighing only 30 pounds, a Hafling resembles a small human as their proportions are rather similar. In fact, the very term “halfling” came from the fact they are considered to be about half of the size of a human.

They are rather quick and agile, able to avoid dangers where others would fail to do so. Some say no one can have the tenacity and courage like a Halfling, even under the greatest of dangers. Others would say it’s simply an enormous amount of luck.

They are mostly jovial, preferring to contemplate the present over the future. Taking pleasure in simple and basic things, many even prefer to get into trouble rather than wallow in boredom. And if there’s one thing most Haflings like, it’s good cheese.

Family names, clan names, nicknames, self-made names, they can have it all, it only depends where they come from and how were they raised.

From charming children-like humanoids to horrifying small creatures, they can take any role with equal proficiency. We’re lucky there are only so few of the later ones.

Makes frequent trips to the neighboring community during which she always makes a visit to a strange old elven woman living alone.

With her parent’s blessings, she’s been traveling the countryside for a long time and boy oh boy does she have some stories to tell.

A calm and shy woman in public, she’s a member of a secret society whose current goal is to infiltrate the important positions and take over the city from the inside.

Easily passable as human children, they can seem as no threat at all, so it is no wonder many become expert scouts, spies, thieves, and burglars.

As the only halfling in the regiment, he’s one of the finest scouts in the army. Not as good as his standup comedy routine, though.

Born poor, he made his way through youth by stealing from the more fortunate. Lately, he’s conscience seems to be getting the best of him.

An older halfling gentleman, he’s the owner of the Chuckling Elf. His inn is all he has, his work, his home, and his life.

Sometimes, you want a silly, entertaining name, or the game simply demands one. Drawing inspiration from other, even unrelated, things is more than fine.

Most bard like to play an instrument. He uses his mind as one, and the words come pouring out like a waterfall.

A not so bright wizard who’s never late nor does he arrive early.

Now you see him, now you don’t. Who is he? Wait, who are we even talking about!?

No matter what kind of a Halfling it is, chances are you’re in for a treat, one way or another. Cracking jokes, staring stronger enemies without flinching, escaping dangers with dexterous acrobatics, and more. All that can be just another Tuesday morning for a Halfling.

Did you enjoy this guide? Please, tell us some of your favorite names in the comments and share your own methods of coming up with a Hafling name.