“Thank you, I shall return then.” – the man bowed at the gnome merchant. “I didn’t catch your name, sir…” – “Zilfiz.” – the gnome said and put the broken toy on the table – “Zilfiz Minilol Brokenfix Fizzleperch. The second. At your service.” 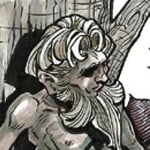 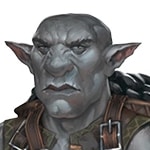 When other races speak of gnomes, they most likely have a rock gnome in mind. They are around 3ft tall and weigh around 40 pounds. The sole purpose of a rock gnome is to fill his day with all sorts of entertainments, having fun as they go.

They remind us of human children, with their endless questions and inquisitive nature, often playing pranks on others, running from one thing to another, never actually focusing on one thing unless it was something they really liked.

Rock gnomes are very intelligent creatures, whose minds are particularly adept at figuring how things work. This makes them good wizards, tinkers, and inventors. They are fairly trustful and friendly, as long as you can take a joke.

Rock gnomes get names assigned all the time, resulting in multiple names, which makes a surname redundant. However, a clan name is sometimes used for clarity.

Small, playful, and joyful, they can win anyone’s heart with their childish charm. While they prank others to no end, they usually very kind and helpful.

Also called Orange for her hair, Cheery for her attitude, Munchy for her appetite, and Charmy for the obvious.

Isoci is the only gnome in the her community that doesn’t have another name given. Even her clan name seems to be ignored, she is simply Isoci.

Rosifi or Shroomnibble as they call her, likes to roam the woods, enjoying the sights, sounds, and colors the forest provides.

Receli of clan Lilyhome, third daughter of Bilybar the Sheepherder. She gets most love, while being a total menace, the most energetic child you ever saw.

Though it’s hard for them to keep their focus on one thing, a good puzzle always catches their eye. Some get into their work so much, they often lose track of time.

Inventor, the fix-it-all and know-it-all, the gnome you turn to when something’s just not working anymore.

Mostly known as Brainbrain, and he’s one of the most talented young gnomish soon-to-become wizards in the community’s history.

Brother of Inkis and Kasston, and together they are the proud owners of Brothers Herbs, the place for all your smoking solutions.

While others mostly talk and hang out with small animals, Ipaji Strangewind is friends with a family of wolves that live nearby.

Rock gnomes are curious, intelligent, and playful. During their lives, they accumulate many nicknames which often have the same weight as their first name. In fact, when Rock gnomes ask for a first name, they are literally asking for the first one the person got.

Did you enjoy this guide? Please, tell us some of your favorite names in the comments and share your own methods of coming up with a Rock Gnome name.