“There, look!” – the young mountain dwarf said, visibly excited. “Aye, it’s a beauty, alright.” – the other one answered, marveling at the sight. “Glahrin, my boy, we are rich.” 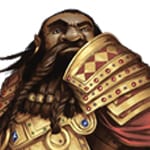 Mountain dwarves about 4’5” tall and usually weigh around 160 pounds. They are strong, tenacious, diligent, and gruff. Dwelling deep inside the mountains, they dig ever-deeper, searching for that great score, that gem cache waiting to be discovered.

Mountain dwarves honor family, clan, and tradition. While pushing the mining and the craftsmanship beyond the scope of most other races, they are also well trained in all military aspects from a young age. They prefer strict discipline and tactics.

Their greed and pride can often cloud their judgment, while their traditional ways guarantee absolute loyalty to their own family and clan. They rarely venture out of the mountains, preferring their marvelously crafted underground halls.

Mountain dwarves take great pride in their family and their clan. They will speak their last name proudly and loudly, letting it speak for itself.

While perhaps they aren’t as skilled and proficient at war as the males are, they are just as good at craftsmanship, often surpassing them in terms of ability and quality.

Eats too much, even for a dwarf. “Her belt could carry a boulder, aye, a fine work that is”.

Trained for combat from an early age, they are disciplined, honoring the chain of command. They are reserved, but ready to protect their own whenever needed.

First son of Kramron Oakbuster, the first dwarf to own a tree farm, and the best wooden shields and weapons manufacturer for trainees.

Having found a large gem cache, everything they own is ornated with gems, often more than even a dozen.

The family has a long history of holding high social positions, a large number of military, diplomatic, and economic roles.

Strong, protective, sturdy, and hearty, the mountain dwarves can be a loyal and kind friend, but also an unrelenting and decisive enemy. It’s not often you see a mountain dwarf adventuring, but when you do, you know he’s made of something else.

Did you enjoy this guide? Please, tell us some of your favorite names in the comments and share your own methods of coming up with a mountain dwarf name.