“Is that a problem?” – the stocky dwarf asked. “Well, we are traders, no? That said, Meldan, you know me so tell me the plan.” – came the much-expected answer. 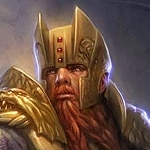 Hill dwarves have long forgotten their mountain homes, and, in fact, if you asked them they would tell you they always lived “in these hills”. They are usually around 4ft tall and weigh as humans do, making them quite bulky.

Opposed to their mountain counterparts, they are much more friendly and open to cooperating with other races. While they still have many craftsmen among their ranks, hill dwarves are also traders and fortune seekers, even ready to find a new home.

They adore gold and all sorts of precious metals, crafting wondrous jewelry out of it. They honor traditions and are known to be reserved, often having set goals given to them at an early age. Arranged marriages happen often as well.

Living in more populated areas, they learned to adapt to a different kind of life. Going even further, many now have last names that sound more akin to the human ones.

Some female hill dwarves are known to have and groom beards. They are versatile, handling exotic animals and crafting magnificent jewelry.

Coming from an honorable family, their word is their bond. Any promise followed by an oath was fulfilled to the end.

While she is nice herself, many townsmen like and admire her for her ability to bake the most magnificent bagels in the whole region.

Her husband, a trader, is more than a week late so she’s actually thinking of packing her things to go look for him.

Brave warriors and cunning traders, they cling to materialistic things, such as precious metals, using them to craft enchanted weapons and armor.

First to make a local animal fur and leather business, propelling not only his own wealth but the town’s prosperity as well.

A meticulous alchemist, very dedicated to his work. Also very prone to greed, who often makes potions of questionable legality.

Has no known family, but is well accepted by the locals. His left eyebrow is uncommonly high, hence the name others gave him.

Friendlier than most other dwarves, they are well suited for travel, and they like interacting with others. Strong, steadfast, resolute, and well trained, they make for great adventurers. If you meet a dwarf in your travels, it’s almost safe to assume it’s a hill dwarf in most cases.

Did you enjoy this guide? Please, tell us some of your favorite names in the comments and share your own methods of coming up with a Hill Dwarf name.