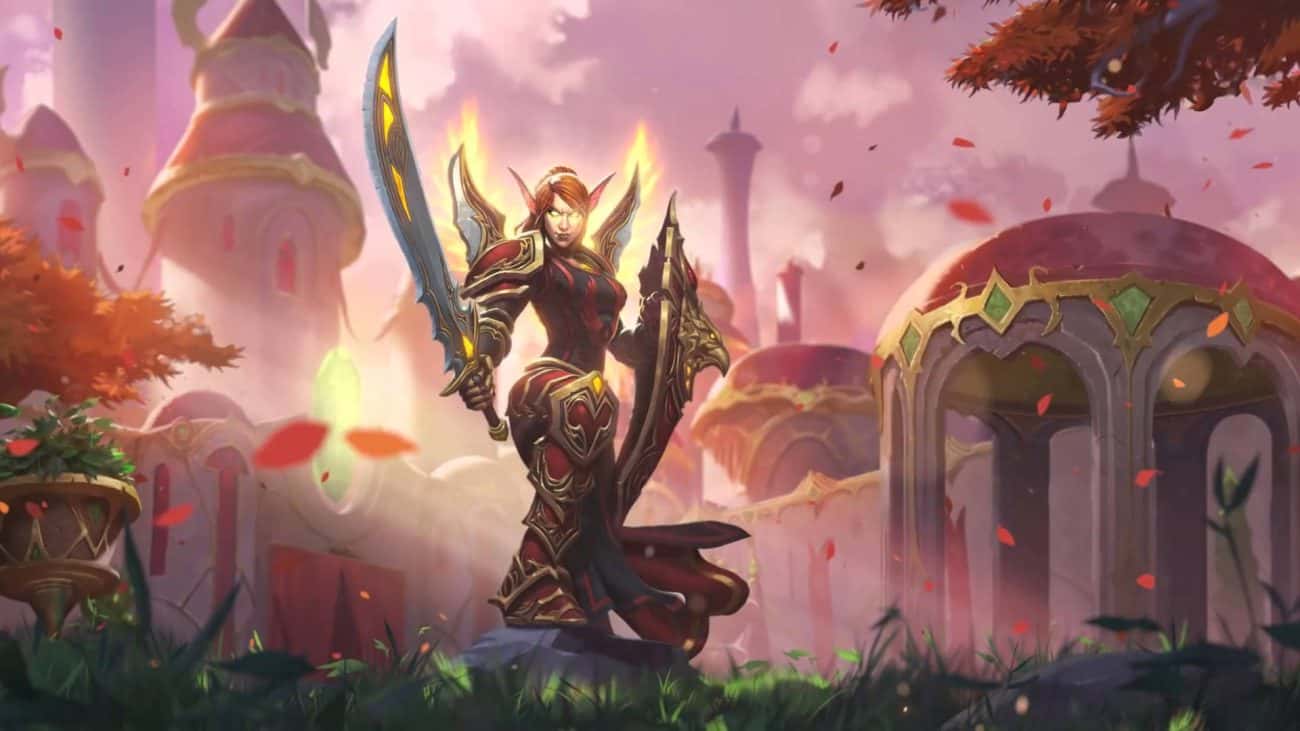 While, in theory, anyone can become a Paladin we can safely say we’re talking about a person who is a knight aided by divine powers, someone who puts faith, justice, and honor above everything else, including themselves. You can use archaic English names as inspiration for first names, while surnames are often made from words easily associated with goodness, integrity, and positive things found in life. Examples of such a name would be Ailwin Roseheart and Winifred Sunstone.

A good Paladin name consists of a name that was common in ancient times, whereas the medieval period has an abundance of such names, along with last names made from words associated with positive aspects of life. Examples of such names would be Gawain Brightshield, Isabel Shadowbane, and Atwell Vowkeeper.

The Scourge of Lizardmen, Orcbane, and The Ruler of Battlefields are some of the titles that this man is known for, by both friends and enemies. His career has lasted for more than thirty years, filled with countless victories along the way, and despite having a couple of losses he’s never lost a war and is now considered one of the greatest generals of all time.

Galloping down the road, this brave paladin is rushing south towards the capital, determined to reach the King as soon as possible despite having three arrows lodged in his body. While he managed to heal himself enough to withstand the hardships of such an arduous journey and deliver an important message, he will need help once he arrives at this destination if he is to keep his life.

Female Paladin names shouldn’t differ greatly from the male ones, apart from the fact that their first name is something we would traditionally consider a female name. That said, you can easily use more masculine and gender-neutral name as we often picture a Paladin being a person wearing armor, and wielding a weapon, where personal combat is a common consequence of such actions. Examples would be Kendall Truthseeker, Odelina Spiritward, and Jamie Orcbane.

If there ever was a true woman warrior, it is her. Tall, stoic, and as strong as a man, she is a true beacon of hope on any battlefield, although she has long left her army duties and exchanged them for roaming the countryside and facing evil that way. Currently, she is slowly making her way east, looking to investigate the rumors of an orc band terrorizing the local population.

Clad in magnificent steel armor, with a large sword on her back, and riding a sublime specimen of a brown armored horse, she is a sight to behold. As one of the more skilled warriors in the whole kingdom, at least if the last tournament is to be taken as an example, she has earned her place among the Queen’s bodyguards, always traveling close by, ready to defend till the last breath if needed. 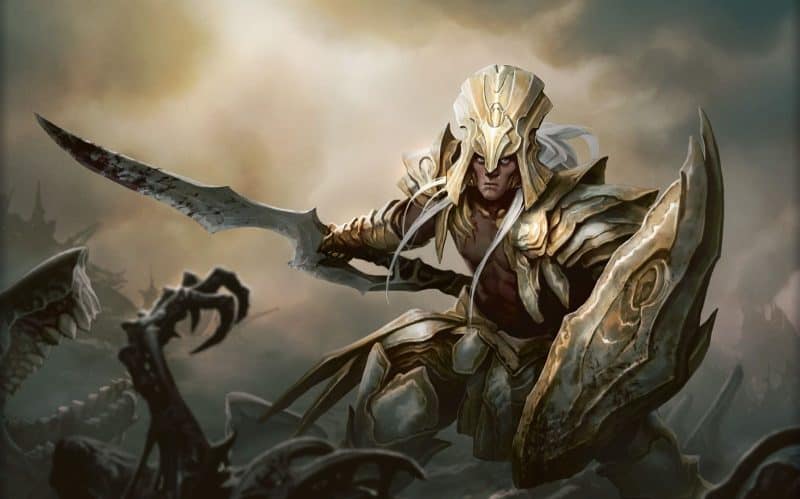 You can draw inspiration from the names of real-life knights of the past, to which you can then add a surname worthy of the brave and just deeds they might perform during their life, and old English names are also a great resource for a Paladin name. Feel free to focus a bit more on the last name as it tends to make the most impact. Examples are Giles Swiftblade, Leomer Pureheart, and Thurston Godspell.

This adventurer decided long ago that life in one place was no good for him, and that discovering lost tombs, temples, and other long-forgotten locations of the fallen empire of the old is a far more enjoyable way to live, despite all the potential dangers one might encounter along the way. In fact, just at this very moment, he is taking his first steps down a tomb belonging to a certain knight that died many centuries ago.

He has earned his name many times over, having fought countless oversized spiders invading the eastern kingdoms for more than a decade now, and the war is slowly but surely being won. Still, there are many more dangers present, and to relax now would be a grave mistake neither he nor his soldiers want to make.

Sometimes you may want to lighten up the mood, even when justice is served, and having a funny paladin name is a great start. Apart from using phonetic words, you can also use the titles to your advantage, and create first names that will essentially be the opposite of the title itself. Examples of such names would be Wantoh Elp, Fhaytin Eevl, and Horrid the Handsome.

She has a weird habit of bossing people around, almost to the point where it seems she’s punishing them, only to completely change the tune and praise, comfort and encourage them. All of this puts the people around her in some rather awkward situations where no one’s really sure whose side she’s on.

While he tends to tell the truth, he’s very much prone to exaggerating, and this can go as far as to almost completely make things up, resulting in far-fetched stories that people aren’t quite sure which part is true and which isn’t. Those who know him would tell you to always assume there’s a fifty-fifty chance that he’s either lying or telling the truth, advice that doesn’t really help much when you think about it. 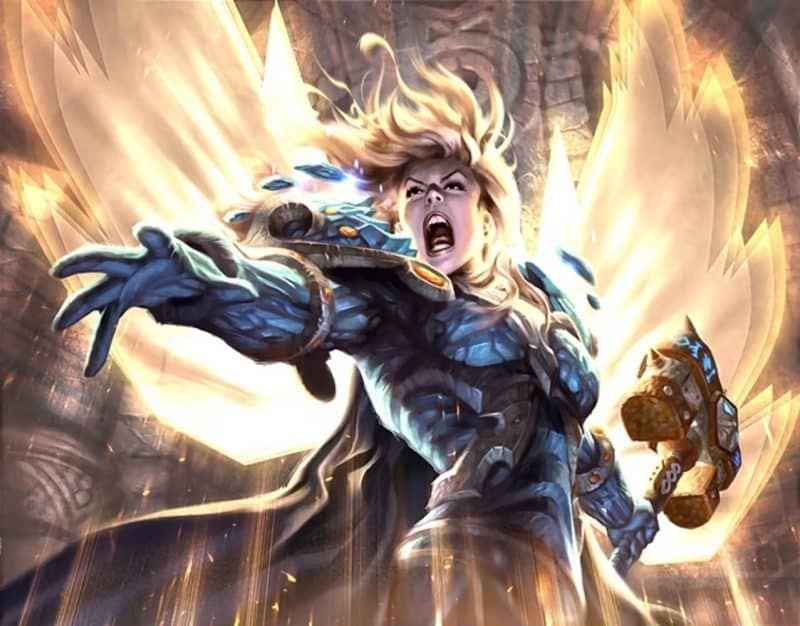 There are many stories depicting brave warriors, clad in steel armor, and wielding their weapons at a powerful evil enemy who’s been plaguing the land for a long time, where none before dared to stop it. These kinds of actions deserve to be done by characters with a name worthy of remembering, a name that will be easily remembered, such as Garad Lightbringer, Emalia the Pure, and Volkan Darkbane.

As the story goes, Tirion raised his free hand towards the gray sky, and as the rain poured down the battlefield he uttered several words after which the clouds rumbled as loud as a dragon’s roar. Moments later, multiple lightning bolts struck down at the unsuspecting orc horde, decimating their ranks in the process, and leaving but a fraction of them alive. With that, it is said he single-handedly won the deciding battle before it even began.

Being appointed the Protector of Knowledge, which included the safe keeping of the famous Tome of Insight, she’s been given a great honor directly from the Emperor himself. Unfortunately, she put too much trust into the wrong person, and soon she will realize the most important book was stolen by the worst kind of people, an organization made solely for the purpose of collapsing the empire and instilling chaos instead.

Paladin orders are organizations, big or small, whose prime objective is to confront evil, where the nature of this evil depends on the world they live in. Some might travel the roads protecting the weak and helpless from the bandits, while others visit ancient tombs and lairs, and fight monsters most people couldn’t even dream about. Such organizations often need a strong name, a name that could deter potential threats just by mentioning it, a name like The Golden Knights or The Order of the Flaming Skull.

All members of this organization wear armor and shields with the same emblem, a rising sun with eight swords protecting it from all sides, and it serves as both a sign of peace and safety, as well as a warning for those who wanted to do any evil acts. They continuously travel the main roads, protecting travelers along the way.

This rather small but strong order is composed of no more than fifty brave knights who are all sworn to protect the small keep that was built around the tomb where a mighty demon was imprisoned by powerful magic, where it took more than a dozen of archmages to pull it off, and they would all die before letting anyone in. 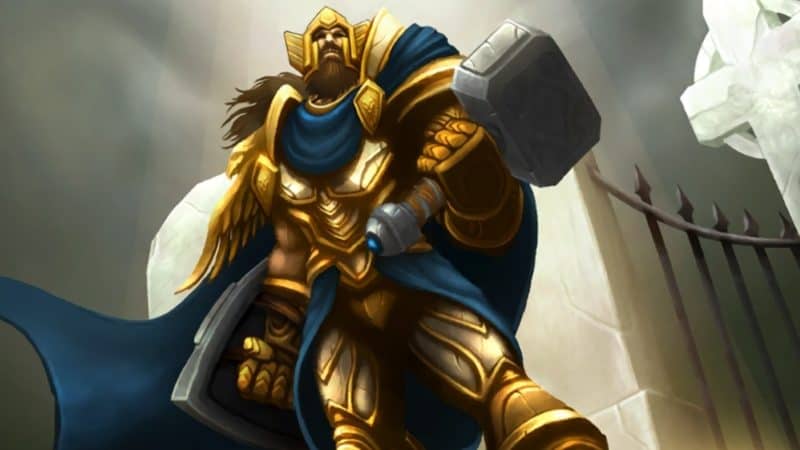 Most of us imagine a warrior dressed in steel armor, sword, and shield in hand, ready to face evil at any cost while carrying themselves honorably both during combat or outside of it. In all honesty, they remind us of knights of the highest moral standard, along with being capable of performing magical feats thanks to their connection with a deity that uses them as beacons of hope. As such, old English first names followed by surnames that are made from words easily associated with positivity, goodness, beauty, and honor are the ones that fit these kinds of characters the most. For even more inspiration on the subject, visit Our Paladin Name Generator.

What and who do you imagine when you talk about Paladins? Are they different in your mind, and what’s unique about them? If you have any particular ways of coming up with a Paladin name, please, do share them along with the names you used before by leaving a comment below.