“I told you already.” – the big burly man mumbled through his long dark beard – “We’re going to see Urlvar the Unbroken and join him in his next raid. Trust me, when we get back, we’ll all have more than a story to tell.” “You mean *if* we come back.” – the other man smirked. “Exactly”- the leader answered – “Sovngarde awaits.” 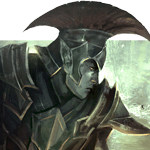 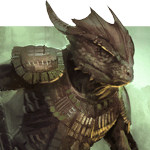 Nords are tall, strong people living in cold places. They are Viking-like in nature, and they love fighting, raiding, and making a name for themselves. Earning a place in Sovngarde, their afterlife, is what awaits any Nord who dies gloriously in battle.

Two things Nords like the most are mead and music, and they are rather religious and superstitions, giving importance to omens where they see them. Living mostly in huts and wooden houses, they build them in a way they can withstand cold with ease.

Nords make for excellent warriors, mercenaries, guards, and soldiers. They can be disciplined when needed, though their fury often gets on display in any fight. Some good Nord names are Raloldr Mjorenson, Evete Farseer, and Rigmrir the Fearsome.

Nords can have surnames, while some of them use a given nickname, a name based on their deeds.

Female Nords can be as fearsome as any other Nord, sometimes with even more to prove.

Also known as the Red, she’s been the talk of the village for weeks now, ever since she came back from a hunt all covered in blood. There are many different stories on what happened that day, but the real truth remains to be a secret that only she knows.

The first female Jarl to run the village, now a town, in their history. Wise, intelligent, and very capable, she has brought prosperity to her birthplace. Soon, however, everything will come into question as the unknown forces keep closing in from the east.

Ever since she fell in the river and somehow didn’t drown, she actually loves to go for a swim. If you asked most of the people who know her, they would probably tell you she spends more time in the water than staying dry.

Only a few use magic as most of them prefer to prove themselves in battle the old fashion way with cold steel in hand. They like musicians and bards, preferring to have one at their side so their exploits are well remembered.

As it was for generations in his family, his father taught him how to read the stars which provided much more information than some thought. Sometimes ridiculed, and sometimes admired, he always learns something from the stars that soon proves to be true.

Son of the famous warrior, he has much to prove. He’s been taking all sorts of jobs that involve killing, but the feeling of belonging somewhere still eludes him. Sovngarde is everything for him, though he is not in the hurry to see it just yet.

Known for his rather incredible imitation of birds, something which he uses as signals before an ambush, he’s also well respected by his fellow warriors. As a skilled fighter himself, he’s a natural-born leader and an honest ally and friend.

Tall, powerful, and resistant to cold, Nords are very experienced fighters known for their resilience. Preferring mostly melee combat, while sometimes wearing heavy armor, most wear fur and leather and rely on their own skills and physical abilities. With swords and axes, they like to prove themselves wherever they go. The day they fall in battle, all is well for them, as they are going to Sovngarde in which they feast and fight for eternity. Give your Nord a name and earn your place in the afterlife.

Did you enjoy this guide? Tell us some of your favorite names in the comments and share your own methods of coming up with a Nord name.