“No.” – the large Hobgoblin said, stopping the other in place before returning his gaze back to the man in front of him. “I will fight you alone, with honor.” – he calmly continued, his coarse voice almost echoing – “And when I defeat and kill you, you will know why Gurkarg leads this tribe.” 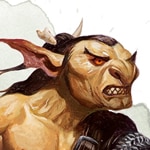 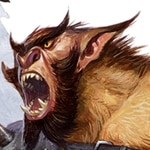 Hobgoblins are large goblinoids, slightly taller and stronger than humans, and are referred to as Goblin’s big brothers. They are strong, brutal, menacing, and organized. They live in tribes which are led by a warchief, the strongest of them all.

Their whole society is of a militaristic nature in which the Goblins and other creatures, slaves, do their bidding. Despite their brutality, Hobgoblins have high regard for honor, and most will act in a way that doesn’t bring shame to their tribe.

Their names are guttural, though more melodic compared to their smaller kin. Some Hobgoblins distinguish themselves and earn a nickname, often an intimidating one. Names like Ekrurz, Khozrug, Lorber Growl, and Zruk the Mighty are some examples.

Hobgoblin’s loyalty to their tribe cannot be underestimated. Everything they do is for the honor of the tribe. Bringing shame to yourself reflects on the tribe, and this is one of the main reasons why they tend to act with honor, despite their vicious nature. While most tribes have a name such as The Red Hand Tribe, some are named in the honor of their great leader, dead or alive, such as Nekrul Tribe.

Little is known about Hobgoblin females, so most names sound more male-oriented. However, with a bit of creativity, we can easily adjust where needed. Some of them have a nickname as well, pointing to the nature of that specific Hobgoblin.

Member of the craftsman caste of the tribe, he’s well known for his smithing skills. Many Hobgoblins owe their gratitude to him, as his equipment allowed them to survive the numerous battles they were in.

Many years ago, a splash of acid hit him on the face, leaving his left side horribly scarred and deformed. As a cleric, he could do heal the wound but decided to do nothing, as he’s far more intimidating this way.

Every once in awhile, a brave Hobgoblin rises the ranks, proving himself in combat. Okvag once slew three elven commanders, singlehandedly, bringing honor to himself and his tribe. Rumors began soon after, stating he would be the one to unite the tribes and lead them to glory.

Sharbod is strong, Sharbod is powerful, and Sharbod is the Chief of the Worgear Tribe. Needless to say, Sharbod always refers to himself in the third person.

While he’s not the warchief, he enjoys immense respect from his tribe. Known for his merciless and brutally effective combat style, he leaves no prisoners alive. He also doesn’t shy away from fighting tricks, knowing fully well killing the enemy before he kills you is the only thing that matters.

Ambushed, and outnumbered, Nar and his band were destined to die that very day. But something woke up in him, a defiant refusal to give up. With a warcry, he welcomed the chaos and somehow ended up being victorious. Covered in blood, from head to toe, he earned his place in history.

Strong, honorable, and merciless, Hobgoblins are a fearsome foe. Sometimes they feel as if they don’t belong to the tribe and their own kind, showing tendencies to do good, rather than evil. Those who do so are well suited for traveling and adventure, though their origin might prove to be more than an obstacle in the eyes of many.

Did you enjoy this guide? Please, tell us some of your favorite names in the comments and share your own methods of coming up with a Hobgoblin name.