“This river here,” said the scout. The adventuring party she was leading slowed to a stop on the road, looking ahead at the inconspicuous, murky river that crossed their path. “Once we’re over that river, we’re officially in Palemba. So, who’s first?” 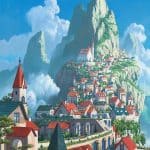 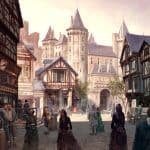 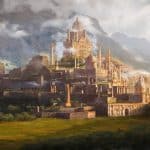 Any fantasy world is going to be filled with countries. Some examples might be republics, tribes, or autocratic kingdoms. However the country is run, it will have a unique identity in the form of shared cultural or religious traditions.

That identity comes through in the country’s name. The distinction between a country and the physical region it occupies is often vague. When searching for a name, think of the region’s history, and how those events may have led to the creation of the country.

Consider what the country is known for, and pick a name which plays into that. A sea-born trade empire might have a name that evokes water, or an anarchist collection of wild mages might be named in the ancient language of magic.

In the smoking jungles around a volcano chain, this country has built a mighty empire of micromanaging bureaucrats. The elite administrators can be recognized by their extensive tattoos.

The scattered wrecks of a thousand ships became overgrown with coral, providing enough landmass for settlers to move in. Now this country is known for its succulent fish and crab dinners.

For a dwarf, a country is anything from a mighty high king’s domain to a local clan. Travelers to dwarven lands commonly get lost, because to outside ears, many names sound the same. Tiny changes in pronunciation are crucial in dwarf names.

This country is spread through the Great Aksumar Mesa. Unique among dwarves, the cities are dug from soft limestone and clay, leaving strips of vibrant colored minerals all around.

The high temperatures of this tropical country come from natural steam vents. Dwarven craftspeople use these to mold razor-sharp glass weaponry which they then trade all over the world.

You would be hard pressed to find an elf talkative enough to share the names of their countries. Rather, these names are often overheard by non-native speakers. The result is a simplification of the complex and sophisticated elven names.

Somewhere in the Ester Hills lies this country, which has never been discovered by outsiders. Only through a royal invite and an escort have non-elves ever visited.

The scattered remains of this country are found all over the world. Originally built using magic, the collapsing ruins still glow white under moonlight, even centuries after the empire was destroyed.

Few make their homes in the frozen lands near the poles. Those who do have a unique culture, a mix of bloody raids, hunting what scarce fauna is available, and cozying up near log fires to wait out the winter.

The warriors of this ice-caked isle are said to have intermarried with bears a generation back. This explains their ferocious roars before charging into battle.

Carved into a frozen waterfall tumbling over a mountain cliff, roads and cities stretch deep into the rock. Some of the rarest precious stones of the north come from this country.

Did you enjoy this guide? A good country name should roll off the tongue as spoken, and can easily become the heart of a good fantasy world. If you liked this guide, let us know in the comments, and be sure to share with your friends!