“Your feathers have the greatest brown color I ever saw. Not even the mountains are that pretty” – the Aarakocra told the female, clearly flirting – “Oh stop, Qrukkass, think of what your wife would say if she heard you”. 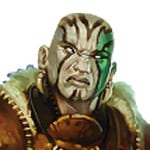 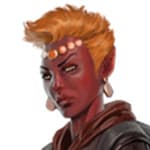 Aarakocra is essentially a humanoid bird creature. Averaging around 5 feet in height, they have wings that span around 20 feet, making them proficient flyers. Per latest, 5e, rules, they have arms as well, though with fewer fingers than humans do.

Their legs are powerful, with four talons that can fold and unfold, providing proficient means to grab and hold onto something. Their bones are rather hollow, for easier flight, and their head resembles a parrot and an eagle at the same time.

They live atop of the highest mountain peaks, in small tribes. Each has its own hunting territory. Since they are excellent flyers, they prefer to fight from range. Their favorite weapon is most definitely a javelin.

As they live in small tribes, Aarakocras don’t have any use for a last name. That said, some earn a nickname due to a certain achievement, whether good or bad.

Their plumage color is usually brown and grey, and in some tribes, it’s always the females that are selected as leaders.

Acts as the head of the group who is responsible for teaching the young ones the ways of the tribe. Good and strict but fair teacher.

She’s the best hunter in the tribe, and one of the best warriors as well as her accuracy with a javelin is unmatched.

Her plumage has the most strange shade of grey, which gets her courted by many males in the tribe, making other females jealous.

Known as notorious flirters, they use any opportunity to do so. Those that can balance the act, usually get far in their life.

In a possession of an ancient tome, which is written in an unfamiliar language. He left the tribe in order to find what the book says.

Leader of the Darkbeak tribe, who has successfully expanded their territory and now threatens the neighboring tribe’s very existence.

Seems to have lost his marbles, as they say, ever since got hit by a rock and fell down the mountain. He lived but is now scared of heights.

Most Aarakocra live a similar life. Small tribes, hunting, flirting and creating offsprings. Sometimes, some of them leave for other lands, usually having a very good reason to do so. Such Aarakocras tend to live an interesting life indeed.

Did you enjoy this guide? Please, tell us some of your favorite names in the comments and share your own methods of coming up with an Aarakocra name.