“Lies!” – the Genasi responded furiously, his sword slashing from one side to another – “ALL LIES!” – he kept yelling until finally the last enemy was defeated. As soon as it was over, he calmed down, displaying a happy and innocent smile. “I think you might have anger issues, Igneous” – his friend teased, shaking his head. 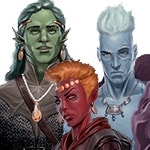 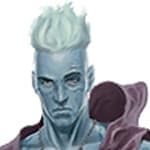 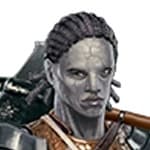 Fire Genasi are the wild cards of the race. With an efreet somewhere in their ancestry, they are volatile, proud, and quick to act. Although they are prone to anger, they rarely keep the argument going for longer periods of time.

Being very impatient and lacking tolerance for other people’s mistakes, they tend to hang out mostly with humans and other fire Genasi.

They are happy and thankful for their magical ancestry, which they consider a gift and show it with pride. Their moody character makes them unpredictable as well, so names like Sizzle, Arson, Crisp, Burn, Fume, and Ignite are nice choices.

Many fire Genasi show barbarian-like traits, turning their temper and anger into violence and fury. Maybe they don’t want to admit it, but most of them enjoy such occasions as they get to express their true feelings with no limitation whatsoever.

As one of the King’s advisors, she has to listen to the wretched human ambassador on a daily basis. Needless to say, she considers him to be a snake in the grass and his words are all seen as poison.

Had a rough time growing up, getting constantly teased and bullied. Once she saved the village from a bandit attack almost on her own. She was praised as a hero and well respected ever since.

Used her adventuring spoils to fund a small organization in a booming town. Today, she’s the leader of the most influential crime organization in the city of Hoskal, a famous trading hotspot in the western region.

Once an energetic young Genasi, full of hope, dreams, and life, she now spends her days by resting, feasting, and drinking, spending her well-earned coin.

Living the life he always wanted. Adventuring, traveling, trusted friends, action at every corner. Little does he know, the next corner almost guarantees certain death.

Flicker
As a town guard, contrary to his name, his life is very mundane and monotone. He’s having troubles not climbing the ranks as he feels everyone could do a much better job with him in charge.

Travels between the towns and villages, making money with his acrobatics and dancing act. He uses low-level magic to enhance his performance.

One of those “lead by example” generals. No matter how many times he fought, he never leads from behind, preferring to be in the thick of it instead.

Fighters, barbarians, conjurers, and evokers, they are the ones that bring chaos, destruction, and overall disruption. If you ever wanted to play a character who’s erratic and fickle, while still having enough consistency, play a Fire Genasi.

Did you enjoy this guide? Please, tell us some of your favorite names in the comments and share your own methods of coming up with a Fire Genasi name.